In celebration of Pope Benedict XVI

Joseph Ratzinger was born in Marktl am Inn, Germany in 1927. The son of a cook and a policeman, he always felt his life was immersed in the paschal mystery from his birth on Holy Saturday and his baptism the next day in the newly blessed Easter waters.

Although the Ratzinger family attempted to avoid involvement with the Nazi Party during World War II, they were not completely successful. Young Joseph was drafted into the German army for a while, but deserted near the war’s end and spent time in an American prisoner-of-war camp.

Joseph studied philosophy and theology; was ordained, along with his brother Georg, in 1951; and earned a doctorate in theology in 1953. For years, he was a professor of theology at various universities in Germany. He quickly became renowned for the depth and breadth of his intellect. He published numerous essays, sermons and reflections over the years, cementing his scholarly reputation.

In March 1977, Pope Paul VI named Father Joseph the archbishop of Munich and Freising; he was elevated to the College of Cardinals in June of the same year. His most prominent position prior to the papacy was that of prefect of the Congregation for the Doctrine of the Faith. It is in this role that Cardinal Ratzinger was responsible for defending the orthodoxy of Church teachings.

Despite his difficult role as the enforcer of Church doctrine, Pope Benedict XVI was known to colleagues, neighbors and friends as a gentle, pastoral man with a dry sense of humor. As Cardinal Ratzinger, he lived quietly in an apartment in Rome, walking to work every day and chatting with those he passed in the streets. He was respected for his ability to listen intently and thoughtfully, even to those with whom he disagreed.

As pope, Benedict XVI traveled and wrote extensively. He authored a trilogy of books on the life of Jesus Christ. His reign (April 2005–February 2013) was marked by a call both to restore traditional Catholic practice and worship in order to correct erroneous interpretations of the Second Vatican Council, and to return to fundamental Christian values in order to counter growing secularization around the globe.

These concerns informed many of his initiatives as pope. For example, he relaxed restrictions on celebrating the Latin Mass, and reached out to the Society of St. Pius X, a traditionalist, schismatic group, in hopes of accomplishing their return to communion with the Holy See.

Pope Benedict XVI affirmed the new evangelization by establishing the Pontifical Council for the Promotion of the New Evangelization in 2010. He followed this by declaring a Year of Faith in 2012-13.

On Feb. 11, 2013, Pope Benedict stunned the Vatican and the world when he announced his intention to resign the papacy. After his retirement, Pope Emeritus Benedict resided in a monastery in Vatican City, living a life of quiet prayer and study.

The funeral Mass for Pope Benedict XVI was held on Jan. 5 in St. Peter’s Square. Tens of thousands of pilgrims gathered in the square to pay their last respects to their beloved pontiff. He died on Dec. 31 at the age of 95. Hundreds of cardinals, bishops and priests were in attendance, along with official state representatives from Germany and Italy.

Pope Francis celebrated the solemn and simple funeral Mass according to Pope Benedict’s wishes. In his homily, Pope Francis said that as we strive to follow the Lord as an ecclesial community, we, too “want to follow in His steps and to commend our brother [Benedict] into the hands of the Father. May those merciful hands find his lamp alight with the oil of the Gospel that he spread and testified to for his entire life … Together, we want to say: ‘Father, into your hands we commend his spirit.’

“Benedict, faithful friend of the Bridegroom, may your joy be complete as you hear his voice, now and forever!” 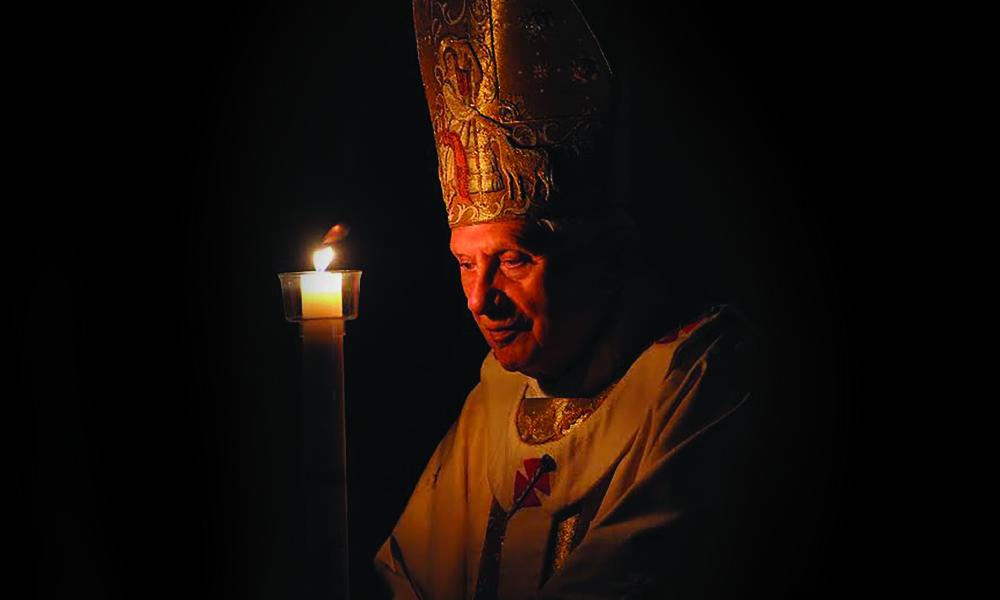